Posted on September 29, 2017 by consumerpolicyinstitute

(September 29, 2017) The Fair Hydro Plan ads being rolled out by the province contain a number of misleading claims.

If Queen’s Park believes that spending more than $5 million on ads celebrating its Fair Hydro Plan is warranted, the least it could do is ensure the ads are honest.

For starters, the Fair Hydro Plan won’t save ratepayers money in the long-term. It will the do the exact opposite.

The Fair Hydro Plan doesn’t actually lower the cost of generating power in the province, but rather, simply defers that cost to future customers in the form of debt and interest payments. That means that today’s rate cuts will cost future ratepayers more.

The Fair Hydro Plan forces the province’s generating company, Ontario Power Generation (OPG), to issue and manage the debt needed to reduce a portion of the billions of dollars ratepayers pay each year to purchase power. Estimates from the province’s financial watchdog, the Financial Accountability Office (FAO), show the province and OPG issuing $26.2 billion in debt over the next ten years, with that money being used to provide a “rebate” on monthly hydro bills. Of that figure, $18.4 billion will be used to lower rates, while $7.8 billion goes to “accumulated interest” costs, as electricity customers won’t start paying back interest until 2028 and it will accumulate interest over the next decade.

By the time all of the debt associated with the Fair Hydro Plan is paid off in 2047, the original $18.4 billion will have been paid back, as well as $21 billion in interest costs. If interest rates rise by one percent, that $21 billion figure jumps to $30 billion.

Any “savings from the Fair Hydro Plan are a mirage, as the long-term interest costs are expected to outweigh any short-term benefit. 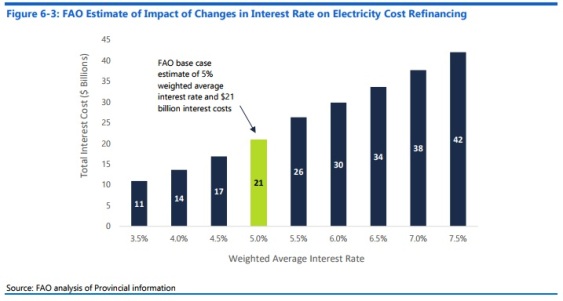 Secondly, the reason that power prices have increased over the last decade at a faster rate than anywhere else in North America is because the province has signed lucrative contracts with a range of generators. The Fair Hydro Plan does nothing to address those lucrative contracts – it simply issues debt to cover those payments, while leaving future customers to pick up the tab. Again, the province is not actually lowering any of the costs associated with generating power in Ontario, it’s simply deferring them.

Thirdly, the Fair Hydro Plan ads make a very misleading claim that the province has made the grid “more reliable.”

Reliability statistics for Ontario’s transmission grid have been improving for nearly two decades – long before the province rushed into its transformation of Ontario’s electricity. The following two graphs show the average number of transmission “interruptions” in Ontario and were filed by Hydro One in applications before the Ontario Energy Board. Note that the data has been improving – fewer interruptions on the transmission grid – consistently over the last two decades.

Yet, this isn’t just an Ontario story. It turns out transmission companies across North America have been getting more reliable over the last 15 years (at least), as shown in the following chart. 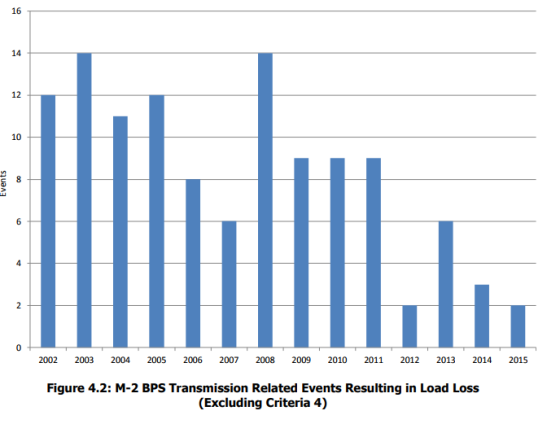 Yet, residential electricity prices in the United States have increased by the rate of inflation over the last decade have and, in many places, actually declined in recent years, as shown in the following chart. Those customers are now getting more reliable service at a lower cost.

Whereas in Ontario, electricity prices have skyrocketed in recent years – excluding the recent artificial rate cut that occurred in May of this year that was a result of the Fair Hydro Plan. From November 2006 to November 2016, for example, the off-peak price of power increased by 155%. 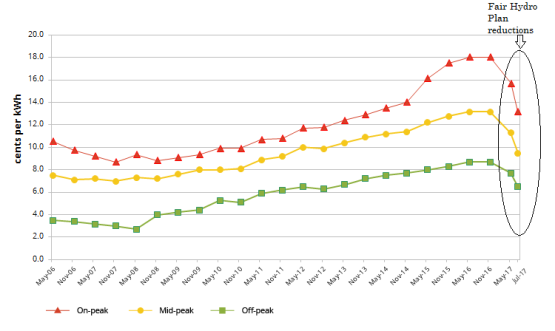 Brady Yauch is an economist and Executive Director of the Consumer Policy Institute (CPI). You can reach Brady by email at: bradyyauch (at) consumerpolicyinstitute.org or by phone at (416) 964-9223 ext 236