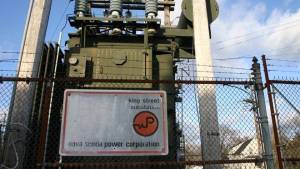 “It’s not wise practice for utilities to be subject to capricious pressures that prevent them from making needed investments in an orderly fashion,” said Tom Adams, former executive director of Energy Probe.

NS Power appeared before the provincial Utility and Review Board for the second day Tuesday seeking approval for $330 million in capital spending this year on 388 projects.

Small business advocate Nelson Blackburn said the volatile economy should be taken into consideration by the regulator as it reviews the utility’s capital program for 2012.“We are in difficult economic times, and (NS Power’s) projects should be prioritized such that there would be little or no effect on ratepayers,” he said in a statement filed with the regulator.

But Adams said delaying reasonable and required capital improvements could increase the utility’s liabilities and costs for future ratepayers.

“The risk of putting off needed capital work could build up an invisible iceberg of liabilities leaving future ratepayers to pick up the tab,” he said. “I don’t buy the argument that if consumers are struggling right now it’s an inappropriate time to make investments.”

NS Power president and chief executive officer Rob Bennett said the economy is part of the equation when the Emera Inc. subsidiary makes decisions to invest in a new project.

He said this is reflected in NS Power’s investment in renewable energy projects, which contribute to the Nova Scotia economy “instead of sending our dollars outside Nova Scotia and Canada to procure fossil fuels.”

But Bennett echoed Adams, noting that “delaying or avoiding things sometimes can create a bigger problem in the future.”

“There is a concept called intergenerational transfers,” Bennett said.

“It’s part of the regulatory and rate making philosophy and we try to put projects in service to serve the customers that are paying for them.”

Yet Adams said each the utility’s proposed capital investments should be carefully scrutinized to avoid a “gold plated” system.

“There is an incentive for private utilities that earn attractive rates of return to pack on the pounds and gold-plate their system,” he said. “So you have to always be alert. There has to be push back and independent rigorous scrutiny is the way to go.”

He said ratepayers need assurances that NS Power is making decisions with consumers in mind, rather than attempting to build the rate base to maximize returns.

Indeed, reconciling the interests of ratepayers with shareholders was a recurring issue during the hearings.

Dhillon questioned if NS Power considers the effect on customers and whether that was part of the consideration.

Bennett said the value for customers is always a priority when decisions are made to improve the system.

“We’re trying to make strategic investments on behalf of customers. To us, it’s intuitive that we start out with the question is there a way to do this more cheaply for customers and these other three questions just ride on top of that presumption that we’re doing it at the lowest cost possible.”

For the original article, see here.