How to mislead Toronto Hydro’s customers on rate increases

Posted on December 14, 2016 by consumerpolicyinstitute

(December 14, 2016) Toronto Hydro customers have been told that the rate increases they are experiencing aren’t that bad. Here’s why those comments are misleading.

In response to the growing public outrage of soaring hydro bills in Ontario, officials often try to downplay the crisis by comparing electricity rates in Toronto to other major cities in North America, particularly New York City. The reason for doing so is obvious. If consumers see that electricity bills in cities like New York are higher than they are in Toronto (or anywhere else in Ontario), they may be led to believe that the situation here isn’t nearly as bad as critics contend and that the near double-digit increases they are seeing on their hydro bills are normal.

The most recent example of this type of comparison can be found in this graphic from a Financial Post article. 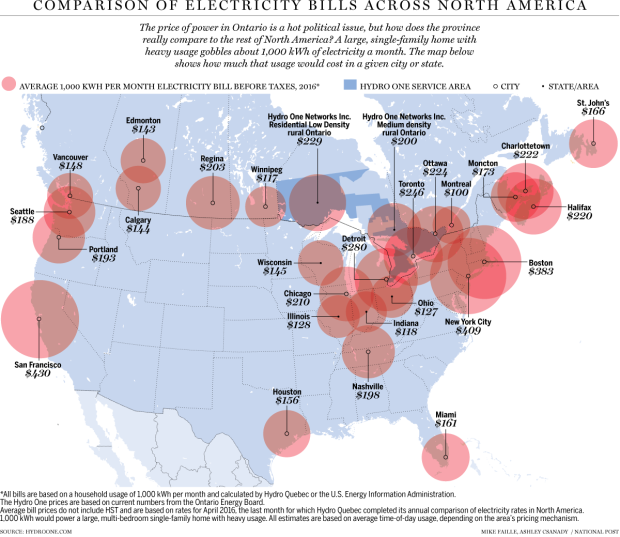 But such an analysis is misleading for two reasons.

First, the simplistic comparison doesn’t clearly identify that, in recent years, electricity customers in New York City have, at times, seen their electricity rates decline – as they did from 2014 to 2015 – or increase at a rate below overall inflation, as occurred from 2011 to 2015. In short, while it’s getting worse in Toronto and across Ontario as hydro rate increases blow past inflation, it’s getting better in other parts of North America – even in high cost markets like New York.

The second reason is that customers in New York have historically paid higher rates than customers in Toronto. Comparing the current, higher rates in New York City to rates in Toronto (and across Ontario) in an attempt to quell public outrage is misleading, as it doesn’t make it clear that the two jurisdictions have always had significantly different hydro rates (with Ontario’s being much lower).

If we go back to 2011 (see below), the average electricity rate in New York City has increased by just 2.72%, which is well below inflation (a little over 1% annually). That means that customers in New York City are paying less per unit of power in 2015 than they were in 2011, when adjusted for inflation.

Toronto customers haven’t been so fortunate. In 2011, the average monthly bill for a residential Toronto Hydro customer consuming 750 kWh per month was $96.66 (CAD). By 2015, that figure had increased to $133.39 – amounting to a 38% increase, or more than 13 times the increase seen in New York City. Those figures don’t include the near 20% rate hike that Toronto Hydro customers were hit with in 2016 – a result of the utility being approved for a multi-billion capital spending program, combined with increases to generation costs.

While prices in Toronto (and Ontario as a whole) haven’t hit the levels of those in New York City, the province is moving in that direction. Yet, at the same time, customers in New York City – similar to many other states and cities across the United States – are seeing their electricity rates level off or decline. Toronto – and Ontario as a whole – is very much an outlier in North America in terms of electricity rate hikes.

Note: All data in this article is taken from the US Energy Information Administration website, as well as from rate orders issued by the Ontario Energy Board. The Toronto Hydro rates do not include the Ontario Clean Energy Benefit (OCEB), which gave all hydro customers a 10% reduction on their bill. The OCEB rebate was financed through general revenues (taxes).

Brady Yauch is an economist and Executive Director of the Consumer Policy Institute (CPI). You can reach Brady by email at: bradyyauch (at) consumerpolicyinstitute.org or by phone at (416) 964-9223 ext 236