Posted on September 27, 2018 by Other News Sources

(September 20, 2018) The government cannot buy every proposed project faced with approval uncertainty, which is why it should appeal the Trans Mountain pipeline decision. 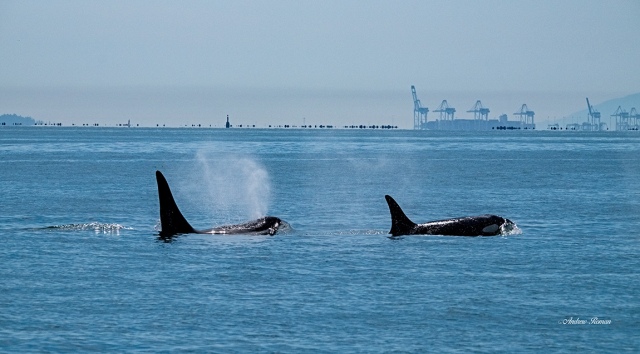 Orcas travelling through the Vancouver harbour.

The three photos above were taken by Andrew Roman during a trip to Vancouver in 2016.

For the original version of this posting, see here.

The CD Howe Institute recently published my brief (500 word limit) analysis of the Federal Court of Appeal’s (FCA’s) decision to overturn the Cabinet’s approval of the Trans Mountain Pipeline expansion.  I recommended that the federal government should appeal the decision to the Supreme Court of Canada (SCC). You can read that here, and continue to read my fuller analysis below.

One of the reasons the Court gave for its ruling was that the Cabinet approved a  National Energy Board (NEB) environmental assessment (EA) report recommending approval.  The NEB report was so fatally flawed, the court held, that the Cabinet could not reasonably have approved it.  The NEB had discussed, but not included in its formal EA, future increases in tanker traffic to and from the pipeline’s marine terminal in Burnaby, a Vancouver suburb.  That additional traffic might have harmful impacts on the Southern Resident Orcas, an endangered species.

At paragraph 449 of its reasons for decision the court wrote:

“[449]  I have found that the Board unjustifiably excluded Project-relatedmarine shipping from the Project’s description.”

With respect, I think the Court got this wrong, for two reasons.

1.  Interpreting “Incidental” too broadly in the Pipeline Licensing Context

The term “Project-related’ is, or leads to, the conclusion that marine shipping is required to be part of the EA because it is related to the project in some undefined manner. But these words are not found anywhere in the applicable EA legislation. This vague language has, unfortunately, crept into the NEB’s and the court’s vocabulary, but its meaning is not the same as “incidental to” (discussed below), which is the language actually used in the law.  “Project-related” begs the question “related how?” Directly related and within the proponent’s control?  Or related only as an indirect result, caused by third parties, over which the proponent has no control?

There is no definition of “incidental” in Canada’s  EA law.  It can be interpreted as broadly or narrowly as may be reasonable.   The FCA interpreted it as requiring marine activity to be included in a pipeline EA.

The Supreme Court of Canada (SCC) has stated in numerous cases that a court interpreting the law should not just read the words literally as written. It should should interpret the language of the statute in light of the purposeof the law, in the context of the entire statute.  So let’s look at it that way.

In fairness to the FCA, the NEB’s reasons for excluding marine activities from its EA   were few, short and not well written.  The NEB said that it did not have regulatory authority over marine effects (which is true, but does not legally prohibit it from assessing such effects).  The FCA’s decision underlined that statement and focused on it. However, the NEB also said that these physical activities were regulated by various other federal departments and agencies, a statement which the Court quoted but did not consider further.  It should have, because the answer lies there.

In essence, the NEB was saying, first, that there were more qualified agencies, also reporting to Cabinet, whose job it was to regulate marine activities, who could better assess them; and second, because conditions of license regulating marine activities (outside the proponent’s control) could not be imposed on the pipeline, it would serve no statutory purpose for the NEB to treat marine activities as incidental to the pipeline.  That is a reasonable explanation, to which the FCA should have shown the required deference.

The purpose of an NEB project assessment is to conduct public hearings and to recommend to Cabinet whether the proposed project should be granted a licence, subject to such conditions as the NEB considers to be in the public interest.  The NEB has no decision making power over approval, it only recommends to Cabinet. Among other options, the Cabinet can decide whether to approve the pipeline, either with the NEB’s recommended conditions,  or with such other conditions as the Cabinet considers reasonable.

Pipeline licences normally contain numerous conditions with which the pipeline owner/operator must comply.  Failure to comply would be a breach of the licence conditions, which could result in suspension or even revocation of the licence.  But all of the conditions of a pipeline’s licence have to be within the licensee’s control.  No one can be required to comply with a condition of licence over which they have no control.  How could the NEB recommend, or the Cabinet impose, marine traffic conditions on a pipeline that begins and ends on land? The pipeline could have no effective control over tanker traffic, while various government agencies and departments have full regulatory control.  What would be the statutory purpose of requiring the NEB to interpret “incidental” for its assessment of a land-based pipeline as including marine activities over which the project proponent can have no control, and over which no marine licensing conditions can be imposed?

The FCA took a somewhat technical, literal approach to statutory interpretation, thereby losing sight of the purpose of the NEB’s role and the context in which it operates.  It seems just as reasonable, if not more reasonable, to interpret “incidental to” in this legal context as meaning incidental to physical activities on land, over which the pipeline has control, and over which the NEB could recommend and the Cabinet could impose conditions of licence.

2.   A Flawed NEB Report Does Not Prevent the Cabinet from Making a Decision.

In another recent decision [Gitxaala Nation v. Canada, 2016 FCA 187, [2016] 4 F.C.R. 418,], the FCA held that applications for judicial review  by that court cannot be brought against reports of the NEB recommending whether a licence should issue for a pipeline.  In the Trans Mountain case the court had to find a way around its earlier decision to be able to set this new one aside.  It did this by setting aside the Cabinet decision, not the NEB report, but doing so on the finding that the Cabinet relied on a fundamentally flawed NEB report. That is how it indirectly reviewed the NEN report.

In its reasoning, the FCA implicitly assumed that the NEB report was the only information that the Cabinet had available to rely on, and that it relied entirely on the NEB, in deciding to approve the project.  If the NEB report was lacking some necessary assessment (marine traffic), the FCA assumed the Cabinet could not and did not get this missing assessment  anywhere else, and therefore, could make no reasonable decision on the pipeline.  That may be an unwarranted assumption.

The NEB has no monopoly on Cabinet information about the assessment of marine traffic.  The NEB’s expertise is in regulating pipelines on land.  It does not extend to regulating shipping in harbours and oceans. Even if we assume, for the sake of argument, that the NEB decision was flawed for excluding the potential effects of tanker traffic and how to mitigate these effects, where could the NEB have obtained the required expert evidence on the Canadian regulation of tanker traffic? Only from the experts in other federal departments and agencies that routinely regulate such traffic. The routes and speeds of the tankers in the Vancouver harbour area are regulated by the Port of Vancouver (an agent of the Federal Crown), with ships being controlled by pilots licensed and employed by the Canadian Government, and regulated by Transport Canada in Canada’s waters outside the harbour.  These would be the same people that would advise Cabinet, upon receiving the NEB report, about whether the NEB provided the right assessment on tanker traffic.

The concern about the protection of the iconic orcas was a widely publicized, hot button issue in the Canadian media. If the NEB did not specifically include the activity of tankers in the formal assessment part of its report, one would still expect the Cabinet, prior to making a decision, to ask the responsible Ministers to obtain full assessments about how these several agencies and departments would protect the orcas.  It is demanding too much from the NEB to insist that they do this assessment.  The federal government must comply with the FCA’s decision, but while doing so, should appeal it to the SCC.

Tanker traffic was, quite rightly, a central concern of the First Nations, the Cities of Burnaby and Vancouver, and the environmental advocacy groups that challenged the pipeline approval in the FCA. The Canadian government must develop a better method of assessing these potential secondary effects of a pipeline in a transparent and effective manner, with public participation. But that is not a job for the NEB, which has neither the expertise nor the regulatory basis for doing so.

Unfortunately, there is no better assessment method now.  The potential effects of marine activities downstream from a pipeline are being assessed and mitigated by various agencies and departments that report to Cabinet, but they have no mechanism for public hearings or other forms of public participation. On the contrary, their reports to Cabinet are covered by Cabinet secrecy.  That is a gap in Canada’s EA system.

The pending reforms of EA law under Bill C-69 will make the situation even more complex, costly, slow and uncertain.  This will lead to more court challenges, more federal-provincial disputes and eventually, fewer — if any — proposed projects.  Indeed, reading through the hundreds of sections of Bill C-69, I found that anyone who might oppose a pipeline had been given every weapon to do so, but there was nothing in it for the proponent’s benefit.  The sceptic in me made me wonder whether the government wasn’t trying to prohibit, or at least severely discourage, any future pipeline projects, without actually saying so in. public.

PS.  The FCA gave another reason for ruling against the Cabinet: that the Crown’s duty to consult with potentially affected First Nations was not done properly.  I may write about this second issue in future.

Andrew Roman practiced administrative and environmental law for 40 years prior to his retirement.  He has also been an adjunct law professor at four Canadian law schools and is the author of more than 100 published articles.

Andrew Roman has been an Energy Probe Board member since the organization began.

For more by Andrew Roman: https://andrewromanviews.blog/

2 Responses to Appealing the Trans Mountain decision: The National Energy Board issues (Part 1)