(May 25, 2012) British traditions boost the de facto state of Somaliland. 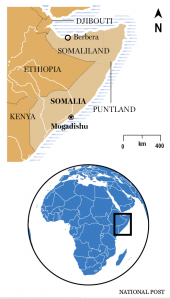 It’s the only African country that doesn’t rely on foreign aid from the world’s rich governments. It’s a Muslim country in Africa that has had a functioning democracy for two decades. It’s an oasis of relative peace in one of the most vicious regions of the world, with a growing free-market economy, low inflation and a currency that has been appreciating against the U.S. dollar.

This anomaly of a country, Somaliland, is unrecognized by any other country in the world, even though the World Bank’s chief economist for Africa touts it as a “success story” and the World Bank itself doesn’t formally recognize it. Somaliland’s story is all the more astonishing given that it is officially part of Somalia, a failed state best known for its piracy at sea and al-Shabaab terrorists on land, and given that it declared independence in 1991 after surviving a brutal repression by Somalia’s Marxist dictator that dispersed much of its population to the U.K., Canada and other safe havens.

While much of Somalia descended into an ungovernable anarchy over the past two decades, Somaliland miraculously found its feet. The miracle lay largely in the country’s good fortune to have been in British hands over most of the previous century, and in its good fortune to be deprived of foreign aid. Without foreign aid lavished on leaders in the central government and with a decentralized British colonial parliament, Somaliland’s local governments exercised meaningful rule, citizens were accustomed to local rule, and citizens had no choice but to be self-­reliant.

In the rest of Somalia, where foreign aid propped up a corrupt central government without benefiting the populace at large, self-reliance meant banditry on the roads and piracy at sea. In foreign-aid-bereft Somaliland, such lawlessness would have killed the country’s best hope for survival — exports from the deep-sea port of Berbera that the British left behind, coupled with roads able to carry to port local goods as well as goods from neighbouring landlocked Ethiopia.

The local clan-based governments calculated they would earn less by plundering the few merchants willing to risk the trip to port than by ensuring safe passage along the road system and sharing in growing port revenues. It was an enlightened business decision. Livestock exports of goats, sheep, cattle and camels, which account for some 60% of Somaliland’s total exports and GDP, has soared, almost tripling in the last five years alone, while Ethiopia — the dominant economy in the region — increasingly ships through Somaliland. The once-underutilized port has already undergone a major upgrade and, to keep up with the needs of its burgeoning trade, Somaliland has announced it will privatize the port.

Because Somaliland is unrecognized, credit has been hard to come by, the country has largely needed to rely on cash transactions, and foreign investment has been all but non-existent. Until now.

Although most of the world’s governments, fearful of encouraging other secessionist movements, are in solidarity with the central government of Somalia against Somaliland, the world’s capitalists are taking a second look. Somaliland may not have the official imprimatur of the United Nations or the backing of a major central bank, some investors ­reason, but it looks a lot more secure than a Greece, an Egypt, or many other countries blessed by officialdom.

This week, Coca-Cola opened a US$15-million bottling plant in Somaliland, the country’s first major industrial investment since independence. Others, including Toyota and foreign airlines, have announced plans to invest. And oil companies, too, are expressing interest — prior to the civil war, several oil majors were exploring in Somaliland.

But the biggest breakthrough for Somaliland may come from a sympathetic Britain, its former colonial master and present home to the world’s largest Somali Diaspora community. In a 21st-century twist on its colonial trading corporations such as the Hudson’s Bay Co. and the East India Co., the British parliament this year established the Somaliland Development Corp. as an end-run around countries that deny Somaliland the recognition, and investment, it deserves.

“The point of the corporation is to facilitate international investment in Somaliland and economic interaction for the benefit of the Somaliland people,” explained British MP Alun Michael in the House of Parliament. “As an unrecognized state, it is isolated. Despite its extraordinary achievements in stability and democracy, international donors cannot deal directly with its government, and foreign investors face uncertainty about whether contracts — the basis of secure business — can be enforced. The point of the corporation is to establish an entity to circumvent that problem.”

The Somaliland Development Corp. will be, in effect, an outsourced Somaliland ministry that will allow foreign investors to help Somaliland develop under the laws of the U.K. Fittingly, the U.K. is helping to advance the development of its former colony into a viable democratic state. The rest of what is official Somalia — a region that was Italian Somaliland, including the autonomous Puntland region, has had no such luck, not least because it lacked the British tradition of democracy. But the Somalis in the former Italian Somaliland also have a path to peace, as we shall see next week.

Second in a series. Next: Drop Effort to Keep Somalia Together
Previously: Occupy Somalia

Lawrence Solomon is executive director of Energy Probe. This article first appeared in the Financial Post.

Lawrence Solomon is one of Canada's leading environmentalists. His book, The Conserver Solution (Doubleday) popularized the Conserver Society concept in the late 1970s and became the manual for those interested in incorporating environmental factors into economic life. An advisor to President Jimmy Carter's Task Force on the Global Environment (the Global 2000 Report) in the late 1970's, he has since been at the forefront of movements to reform foreign aid, stop nuclear power expansion and adopt toll roads. Mr. Solomon is a founder and managing director of Energy Probe Research Foundation and the executive director of its Energy Probe and Urban Renaissance Institute divisions. He has been a columnist for The Globe and Mail, a contributor to the Wall Street Journal, the editor and publisher of the award-winning The Next City magazine, and the author or co-author of seven books, most recently The Deniers, a #1 environmental best-seller in both Canada and the U.S. .
View all posts by Lawrence Solomon →
This entry was posted in Energy Probe News, Fossil Fuels, Oil, Uncategorized and tagged foreign investment, markets, Somalia. Bookmark the permalink.